Forums for the FreeOrion project
https://freeorion.org/forum/

by JamieK1981
I checked it out, its focusing on multiplayer, which automatically makes it a bad game to me....i hope they do better then the trash that was officially made.

by M4lV
The thread title should be "similar projects(!)", not project, since there are two games in total. Btw. "Birth of the Empires has gone open-source (bote.codeplex.com) so you might add it to your OSS space strategy games list too, tzlaine if you want

. Btw. Supremacy is non-commercial and open-source as well (supremacy.codeplex.com). The entry in the strategy games list seems wrong.

Since Supremacy has no AI yet, it's all about multiplayer. BotE has an AI so it's also able to focus on singleplayer right now. Supremacy has to go there first AI-wise to be able to do that too.

by mstrobel
My initial focus with Supremacy has been to support basic multiplayer gameplay. I felt it was best to get something playable out in the wild so that I could get more extensive feedback about the game mechanics. In the long run, it would be much more costly to adjust the game mechanics with the AI already in place

First-class support for single-player gameplay is very important to me. While the focus up until now has been on multiplayer gameplay, this in no way reflects my ultimate vision for the game

Since BOTF was basically MoO 2.5 (though the equation is not exact) it could be interesting to have a look at it how we solved certain things. Code is available at http://bote.codeplex.com.

and combat like this (so far dev version only

Although we currently do not have anyone who might help you guys with your OGRE 3d combat, we are trying to get attention for you as you can see here in this Wesnoth forum thread: http://forums.wesnoth.org/viewtopic.php?f=13&t=29070. In the end we'd hope to both be able to use what you do here. As far as 3d models are concerned we might have to add additional binary .X loading classes and adapt our ship stats and weapon types to the engine but this should be a minor problem then.

I hope you're okay with all this. If not just tell me so and I'll remove references in the thread above.

by Geoff the Medio

M4lV wrote:...we are trying to get attention for you as you can see here in this Wesnoth forum thread: http://forums.wesnoth.org/viewtopic.php?f=13&t=29070.

You've embedded some concept art / mockup in that post, but labelled it as a screenshot. This is misleading, and I suggest replacing with an actual screenshot, or adjusting the text that describes it.


In the end we'd hope to both be able to use what you do here. As far as 3d models are concerned we might have to add additional binary .X loading classes and adapt our ship stats and weapon types to the engine but this should be a minor problem then.

You can use FreeOrion content and code as long you uses and/or release under compatible licenses.

by M4lV
sorry, my mistake. I've taken a modified engine screenshot from Strooka now and labelled it accordingly.

by M4lV
New Alpha 6 of "Birth of the Empires" is out. Thanks to pd here from the forums who lend us his one of his snazzy pictures to create a full race-specific UI skin out of it, there's a new race playable now, the Khaorons. Below are some screenshots which show the new race and some new features of this version of BotE (preview jpg's have <100 kb size each, hope that is okay, if not, I can remove some of them; clicking on them leads to full resolution png's):

Tutorials on gameplay mechanics and game controls are planned for Alpha7, so in short, what you need to get started once you are in the game is:

M4lV wrote:There are some major updates with regards to project(s) mentioned here in this thread. One of them (the more advanced one) named Birth of the Empires or BotE has undergone a complete content overhaul resulting in removing each and every bit of Star Trek content and replacing it with a new self-made one. Artwork has been asked and gotten permission for from various skilled artists over the web (one has even worked for Mass Effect at BioWare, Tim Appleby his name) and from Space Empires Modder Atrocities and was then put together to achieve a consistent universe.

Some screenshots of our current build: 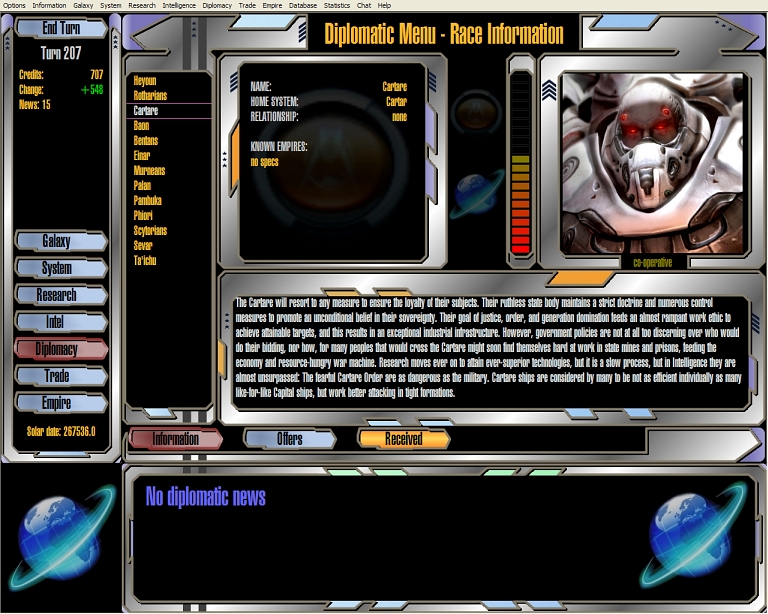 Features of our current alpha:

* Up to 4 playable races and 142 so-called minor races
* Relatively large 30x20-sector 2D galaxy map with one sector representing 20 lightyears in diameter
* TCP/IP LAN and internet multiplayer as well as singleplayer against an AI with scalable difficulty levels, also with non-cheating level
* Ship battles and invasions (no visualization yet which is in progress)
* Complete empire management like planetary build-ups and resource trading
* Diplomatic interactions like alliances, war pacts, trade agreements and bribing with all occuring species in-game

In-game music btw. is usable for non-commercial projects when the following attribution line is written in the credits page: "Music by Eric James - http://www.myspace.com/ericjames".

We recently worked on improving our galaxy map a little and since you guys already coded a nice planetary rotation system view (which you've thankfully already given to Mike Strobel, the creator of the other BotF 2 Project named Supremacy, years ago), it'd be a nice thing if we perhaps could work together somehow to get it into BotE too which uses Windows MFC library and GDI+ for our graphical UI. Btw. the game runs extremely fine and stable under Linux using latest WINE build though of course that isn't as nice having it natively there, is it

Btw. the BOTF2 forums link above isn't working anymore. Posts are currently transferred to another host. Our native german forums however can be found at http://www.birth-of-the-empires.de.vu.

Is there a working link I could check out? I like the screen...

by rainer
well there are several links....

Offical homepage hasn't be re-activated since last breakdown, it's at http://www.hp.birth-of-the-empires.de/ -> there are also further screenshots and download-link to actual version Alpha6.1 (don't forget: Only installing "English" will bring the English language into the game....when did german, just uninstall and install again

Offical http://www.birth-of-the-empires.de/ is actually linked to our Wiki.

Main german board is at http://www.forum.birth-of-the-empires.de/

There's also an English board at http://botf2.star-trek-games.com - there's a BotE-Section.

by Zireael
Nice! Any guides for newbies picking your game up?

by M4lV
sorry for the late reply, there aren't any guides out there yet but I can give you a quick one if you want:

First, pick up a race in the start screen, you might want to start with the Coalition of Planets since they are the easiest race to get minors diplomatically under their control. Next, send out your ships towards the neighboring star systems by clicking on the fleet symbol inside the sector box on the galaxy map.
Doubleclicking on your home system Terra opens up your system production menu for that star system. Start with building 6 research buildings (universities) by clicking on the build list in the middle of the screen. Always keep research buildings fully assigned except for the case that your food supply gets low. In the beginning though you can tolerate minus/negative food production since you got 1000 food in store to use.
In the research menu, give 100% to engine tech by clicking on the right side of the bar under the engine tech box. Research this until your level is 3 then research the other fields one-by-one with 100% there.
That's it for the first turn. Proceedings for the further turns depend on what systems you got nearby. If there's any (friendly) neighboring race there, try to get a trade treaty with it and start trade routes by laying them in the system trade menu and clicking on the trade route button and afterwards clicking on the sector you found the neighboring race in.
Don't use credits at the beginning for those minors, rather use them to buy an additional colony ship. Before doing so make sure that the shield tech of that ship class is 0 so the production cost is minimal. You can do that by clicking on ship design in the research menu. You'll notice that terraforming neighboring races' planets will improve your relationship with them as well as having a trade route set which also continuously improves it.

That should do it as a beginner's guide. If you're having further questions for late(r) gameplay, feel free to post it here (as long as the moderators agree to that) or in our german forum over at http://www.forum.birth-of-the-empires.de .

by Dilvish
Since this thread isn't really about FreeOrion, I think it should be moved into the Off Topic forum, particularly if there is going to be a continuing discussion about playing this other game.

by M4lV
sure. btw. BotE is now also available as an Android port on google play and amazon app store: