[AAR] Rise of the New-Terran Federation

For topics that do not fit in another sub-forum.

[AAR] Rise of the New-Terran Federation

Basically a sort of story of my gameplay with the following parameters: 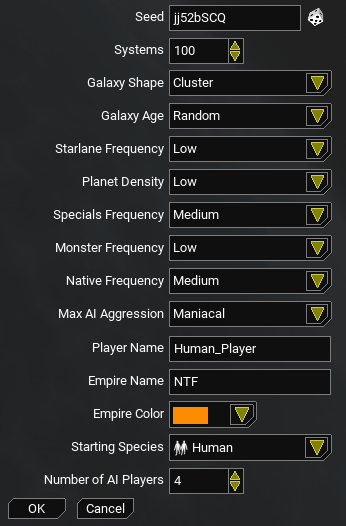 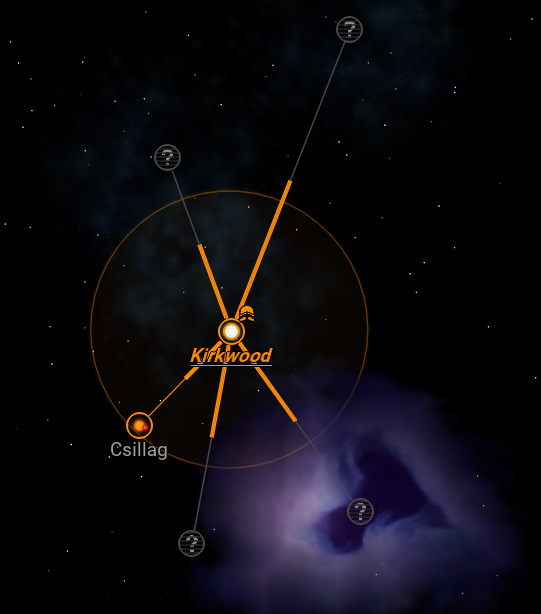 That there, this backwater civilization, is the capital and only planet of our newly formed New-Terran Federation, or NTF for short, forged from decades of conflict, warfare and destruction, now ready to explore the stars, for better or for worse.

Supreme Commander Reze watches from his command post as his allied forces begin the final assault on the United Front's capital, the last remaining stronghold and the last obstacle in the unification of Kirkwood, a conflict that has lasted for the past 35 years, initially fought by 7 major powers and dozens of minor powers.

He watches the ensuring assault before being interrupted by his fellow General Heimar.

Heimar: So, this is it. It all ends here.

Reze: After all these years, it truly has come down to this.

Heimar: Well, it was inevitable after the strategic blow was delivered to them just a couple months ago.

Reze: Once we take this stronghold once and for all, we will finally be known in history for unifying the entire planet under one banner.

Heimar: Through brutal conquest must i add?

Reze: Well, such is a necessity for the stubborn who refuse the idea of a united planet. After all this is over, we can finally turn our eyes outwards towards the heavens. We will finally have the power to elevate ourselves towards greatness.

Heimar: I just hope that after the conquest of the capital, there would be peace at last on this planet, for there will be resistance groups that will arise.

Reze: Such is a minor concern in the quest for glory, wealth and greatness. They would be dealt with accordingly, but for now, let us celebrate in advance of the victory of our forces over the last stronghold.

After 23 years of rooting out any resistance as well as the extensive rebuilding of the entire planet from decades of conflict, the NTF is now ready to launch multiple expeditions to nearby star systems.

Interstellar travel had largely been a untested and unproven theory, until recently with the discovery of so called "space highways" that connected systems with others. Initially this theory was disregarded as being absurd until Reze himself looked into this theory, stating that if the researchers are right, it could mean a new age of interstellar travel, and most importantly, colonization of the heavens.

The NTF already had a minor space fleet that it used to minor effect during the unification wars, which would prove highly useful in the age of exploration. It was only a matter of outfitting them for interstellar travel.

At the Imperial Palace

Reze: "So you are telling me, that the theory of lanes was actually proven to be true?"

Scientist 1: "Yes, for one of our experimental vessels has been able to travel astronomical distances in as little as months"

Scientist 2: "There are still minor issues that will have to be fixed in the coming months, but the main point is that the drive that we used in our vessel has been proven to work, and it should only take weeks to outfit your space navy with them. Sir, we may ha-"

Reze: "Just entered the new age of exploration. Have your team produce a pair of interstellar scouts to scout around our nearest stars, and if possible, identify planets that are possible for colonization. I will organize the assembly to produce the necessary funds."

Scientist 1 and 2: Right away!

With the two scouts ready, they leave the orbits of their homeworld to explore the stars.

The next two years (12 turns) has seen the discovery of multiple suitable planets as well as countless others. A colony ship has been sent to a terran planet which has been designated "Deneb Beta II" in order to settle. One noticeable feature of this planetary system is that it contains a tidally locked moon, which could play useful. Some of the planets have had minimally crewed outposts established in order to claim them until they can be settled. With that, the full extents of the cluster the homeworld is situated in has been catalogued and mapped. 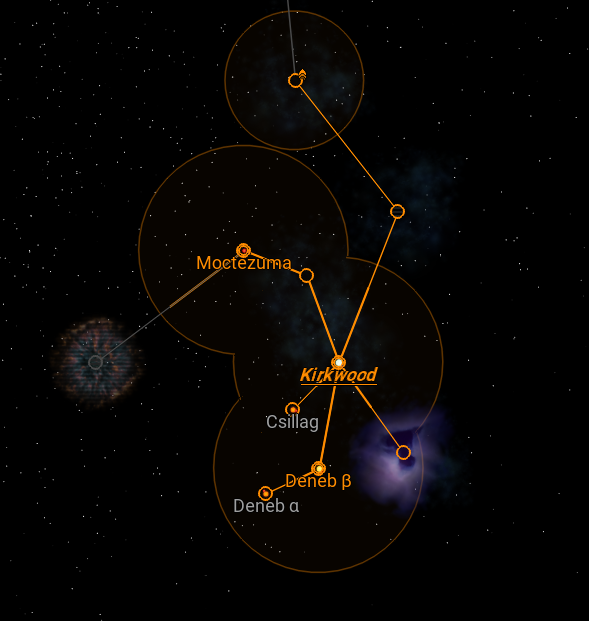 All was going well until... 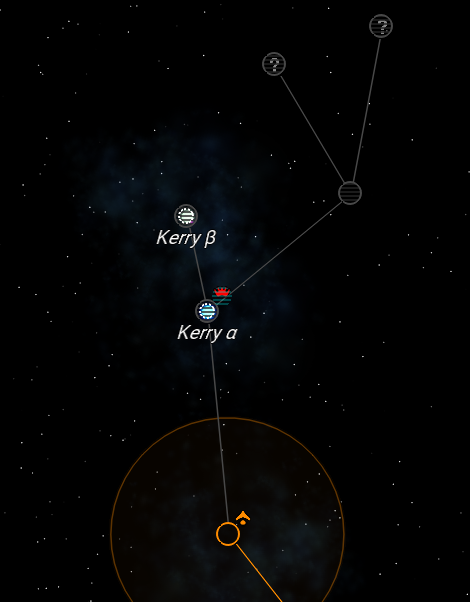 "Well, this is going to be a problem", says one of the scout's captain to his crew. "It appears that that system is protected by a massive vessel. After finding the remains of a ship that was the victim of it's onslaught along with any recoverable information, we can say that although this vessel is lightly armed, it possesses a weak field generator of some sort that would make whatever weapons our navy have completely useless. It may have been created by the inhabitants of that planet"

"Okay, you will have fun telling the emperor this news. He won't be quite happy to hear that funds will have to be reallocated towards the costly strengthening of the space navy", says the helm.

"Why is it such a big deal, we can always find another way out of our cluster, can't we?", says a crew member.

"Sadly no, since it has been proven impossible to stray off this starlanes without immediate destruction, and this is our only route out", the helm replies.

'Well look on the bright side, if we can eliminate that vessel, we could seize the planet with a large ground force. More glory to the federation!", says another crew member.

At the Imperial Palace

Reze is at his desk when he receives a comlink transmission from one of the scout ships he had sent out a year prior.

Comlink: Transmission Start "Your majesty, this is Captain Keia of the Cypress. We have found that the only link out of the cluster has been protected by a well armed and armored vessel. It possesses armor that unfortunately the Federation has no way of piercing. It may have been put up by the local inhabitants as a defensive measure. We may have to get the research teams to work on a much more powerful type of weapon. What may interest you is that if that ship can be taken out, there could be a clear path to the acquisition of that planet." Transmission End

Reze just sighs, already realizing the ever increasing costs of his ventures.

The next 3 years (36 turns) would pass developing the colonized planets as well as further technological developments in the field of industry, military technology, ecology, as well as other fields. One major breakthrough that would be realized at the end of this time period is the advent of a new type of weapon, High powered lasers, as well as major breakthroughs in field technology that unlocks the secrets of effective field armor, the same type used on the vessel that was described prior.

In the Chief Engineer Office 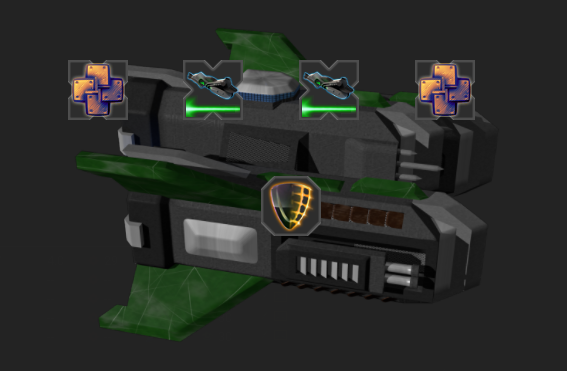 Chief Engineer Heimer: "And so that concludes the designs and blueprints for our latest space warship. What do you think?"

Reze: "Well, I'm impressed to be honest. But wouldn't this render our current designs obsolete?"

Heimer: "Effectively, although these new ships will take a substantial amount of time to produce with our current production capacity"

Reze: "No need to worry, for i have gotten word from the research department that they have mastered the art of complete automation of production machinery. They say that it can double our production capacity without having to expand. I hope they are right, for their sake."

Heimer: "So, going to use this new design to 'liberate' that fancy planet you found?"

Reze: "I see you still know the right terminology, and yes. I have already drafted the necessary men for the task."

Heimer: "In the name of the federation!"

Reze: "In the name of the federation." 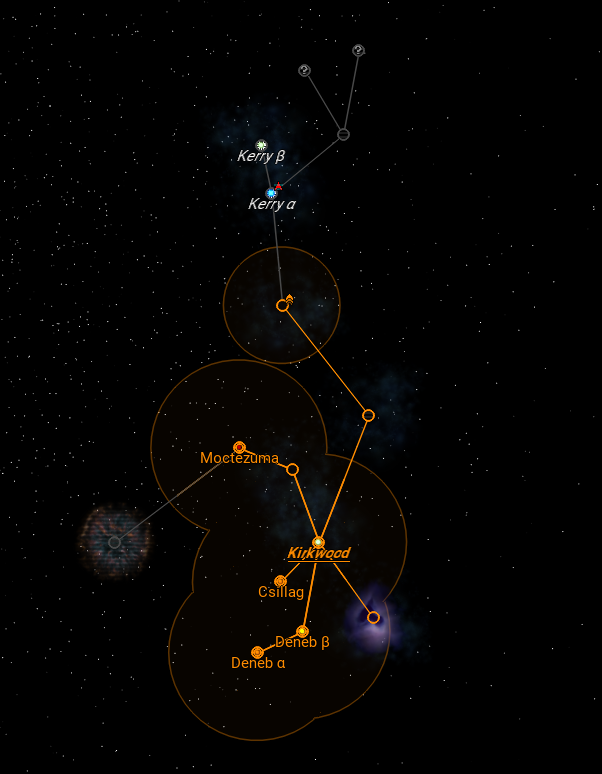 After years of build up, both industrially and militarily, the time has come. The time to acquire the gateway to the heavens. But first there were.....complications.

Comlink: DISTRESS SIGNAL START "Emperor! This is Captain Keia of the scout Cypress, we have been ambushed while scouting the system for defensive structures! It appears that they have another ship protecting the planet!" (Sounds of the hull being riddled) "The second ship just appeared behind us before we can complete our scouting! We won't be able to es-" DISTRESS SIGNAL END

Reze just stares silently at the now dark screen, taking in the frantic tone of the scout captain.

"This is rather....distressing. This will rather complicate things..", Reze thinks to himself.

Despite the newfound knowledge of the forces defending the planet, just a month later the order was given to the now strengthened space fleet to neutralize the defending fleet.

Captain: "There is it boys, the system that we are to secure!"

Fire director officer: "Our taskforce should be able to take this system!"

Captain: "Don't expect this fight to be easy now, we don't know what will happen nex-"

It would take three months of on and off fighting, with new defending ships being produced every few weeks in an attempt to break the blockade to no avail, to finally secure the spaces so that the troop transports can roll in. This battle would go on to show just how necessary the new military technology was, the frigate Guruvar found that its weapons were unable to even scratch the armor on the defending ships while itself sustaining serious damage, only being saved by the brave actions of the damage control parties. Luckily, no ships would be lost during the conflict. A month later, the troop transports have finally arrived in the system, ready to commence the invasion, which would be carried out with no further problems.

The frigate was sent to the nearby inhabited system, which was found to be lacking in defense structures. The system was then sighted in the crosshairs of the Federation, intended to be acquired in the new phase of expansion.


Over the next few months, another system would be acquired, and with it, a gigantic sensor array that has an enormous range. After the conquest, sensor sweeps reveal that the Federation is not the only organized large scale space entity.

Heimer: "So from the data that we have collected, it turns out that there are multiple planets on our northern frontier that have been aligned to the so called 'Bloc.'

Reze: "Hmm, so another empire. We will have to establish the office of foreign affairs. We shall wait for this first contact in the meantime."

Heimer: "I don't think they will take your recent conquests lightly."

Reze: "These conquests were needed to expand our might. Our production capacity has increased tremendously and the inclusion of different alien species has been a boost to our diversity, proven that they remain loyal to us." 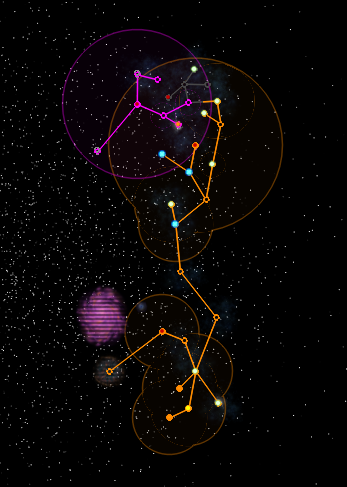 What happened to themmmmmm?????
Any code or patches in anything posted here is released under the CC and GPL licences in use for the FO project.

Furthermore, I propse... we should default to four combat rounds instead of three ...for the good of playerkind.
Top
Post Reply
4 posts • Page 1 of 1